The following Spirit Story, like so many of mine, has a lot of violence. Be warned. It also has that magical synchronicity that has saved my butt so many times, and has an angel housed in a woman’s body – a woman that I loathed and hated with all my soul. Read only if and when you’re in the proper mood. Or not at all.

In my previous tale about the dog pack, I mentioned my boyfriend Jack. This story pre-dates our relationship a bit, so I need to back up and explain. I met Jack when he was my girlfriend’s boyfriend. Joanie was a vivacious little hillbilly from Alabama, 17, and I was an ancient 18 year old. Jack was…. um… 39 that year? Yup, he liked them young! Joanie was like my alter-ego. She was a towhead blonde, I was – whatever! They called her Tits, and me Tidbits! She barely came up to my shoulder, but we could swap jeans – (not blouses!!!) and she had the irritating habit of borrowing my underwear when she hadn’t had time to do her laundry. I hated that! Having no sisters, I had never experienced that! Coming from a houseful of them, it was a natural thing for Joanie to do.

Joanie had moved in with me, to escape a brutally abusive uncle, whom her mother insisted on having live in their home, even knowing what he had done to her daughters in the past. When Jack came over to meet me, he instantly saw ‘danger’, the 2 of us hooking up our mutual lives together. He gave me the .38 at that time, knowing that Joan was too…. nervous (!) to ever be able to use it. But he wanted us both safe.

At this time, I was involved with the first (of many) horrible monster-men. Jeff. **brrr** An awful, twisted tale that I have no need to recite fully. Just this one day of it. Jeff was wanted by the law, had jumped bail on grand theft charges. He had stolen a Harley, and come to my apartment, asking that I jump on the back of it with him and take off. Joanie and I, just the day before, had rescued her little sister Doris from their mother’s basement, where we had found her chained…. bloody, bruised, and ya can probably figure out the rest.
Joan was at work, and I had the stand-watch-over-Doris duty, because we were afraid that Joan’s Mom or Uncle might show up to get her back.
Even if I had wanted to skip town with Jeff, there was no way I could abandon Doris. She was in no shape to be left alone. When I had seen Jeff pull up, I had gone outside to talk to him, knowing that Doris couldn’t handle seeing ANY man at this time.

Jeff and I argued. He kept insisting, I kept saying no. (I think he just wanted my stash of cash for his escape trip.) He flew into a rage and grabbed me by the wrist. I tried to twist away, couldn’t and…. well, I kneed him in the crotch. Hard. (Hey, little women need to fight dirty some times!) He folded and to give myself a little more time, I kicked the bike over – hoping it would land on him. That was not a smart move. He grabbed my ankle as I went running by, and I hit the concrete – the breath knocked out of me – and then the next thing I knew, he had rolled me over and was sitting on my chest and punching my face, the back of my head hitting the concrete each time, stars exploding with every hit.
I could see Doris at the window – horrified. I screamed to her to call the cops, but she didn’t move. A neighbor man came running out, dragged Jeff off of me and somehow (with my head spinning) I got to the safety of my apartment. Poor Doris was just huddled in a corner now, shaking. I deadbolted the door and got to the phone. I could hear yelling outside, and I had a feeling that this neighbor was no match for Jeff. I dialed the police, and who should answer? Sharon Stewart. Oh, GOD!

Sharon Stewart was my brother Mike’s ex-fiancee. She had dumped him a couple years before, broke his heart and probably something in his spirit, too. I hated this woman. I loathed and despised her. The last time I had seen her in town, it took everything in me to keep from scratching her eyes out. And now she was the radio-dispatcher for the cops? Grand.
I almost hung up – then heard Jeff pounding at my door. Saw Doris’ eyes go wide in terror. I babbled out to Sharon, who I was, where I was, send help quick. She immediately put out the call and then insisted I keep talking to her. I said no way – I was getting my gun. I let the phone drop and got the gun, assembled it, loaded it and went back to the door – which was starting to bow in with every thud.
“Jeff – I called the cops! They’re on the way, you’ve got to get out of here.”
“No you didn’t, you lying bitch! No way would you call the cops, you’ve got a ton of dope in there.”
“I also have Joanie’s sister in here and I’ll do what I have to, to keep her safe. Now get out of here – quick!”
His voice went low and snaky…. “You open this door right now or when I get in there – I’ll do you both.”
Oh God!!!!! Please don’t let that thought go into Doris’ mind. The gun was pointed at the door. Could I shoot through it? “Jeff, I have my gun, and I will shoot you, you motherfucker.”
“Yeah, right. That’ll be the day. You can’t even kill a mouse.” His voice kept moving from one side of the door to the next, probably he was figuring I’d try to shoot through it. I told Doris to get into the bedroom and barricade that door. The poor girl didn’t move. I screamed at her to get in the bedroom again, and then the pounding resumed – the hinges were about to break!Not knowing what else to do, I unlocked the door with my left hand, swung it open and shot – point blank – with my right. The sound was huge! And so were my eyes. There was Jeff, standing with his right arm braced against the door jamb – His left fist up in the air for the next pound. And blood was dripping from the arm. Not the chest, where I had been trying to shoot! Oh God, I screwed up! I think my hand was shaking so bad that the shot went wild.
Jeff looked at me in complete amazement. “You fucking SHOT me!”

I backed up 2 steps, put both hands on the pistol and went into a shooting stance. “Damn right and I’ll do it again. And this time it’ll be right through your wicked heart.” His mouth dropped open, and his arm slowly came down from the wall and he was looking at the bullet hole.

Just then, sirens started to sound in the distance. I heard Doris collapse behind me and start to sob.
Jeff’s eyes were still wide with amazement – not anger yet, just total shock. “You did call the cops??? You weren’t bluffing?”

Asshole. I might never have done any of these things for me, but for Doris? To try to protect her??? “Damn straight. Now you better run fast, you worthless piece of shit.”
He took off down the hallway, holding his arm, leaving a blood trail behind.

I locked the door back, picked Doris up with one arm – the child only weighed 90 pounds dripping wet, and got back to the phone – where Sharon had remained, listening to all of this.
“Sharon – I just shot him. Listen quick – I can hear the sirens, your men are close. Please, I have an illegal gun, I’ve got drugs all over, I have an injured 15 year old that I’m sheltering. Can you get the cops to go after Jeff and not come here???”
Immediately she radioed them, and I gave the description of the Harley. She came back to me, could hear Doris sobbing in my arms. She said that the cops would have to come back to the house. Were any drugs laying in open view? I said no. She told me to put the gun into a drawer. I did. She asked about blood – oh yeah, all the way down the hallway. She asked if I was bleeding – I said yes, but not enough to create that.
She thought for a minute…. Listened to the radio…. There was an APB out on Jeff now, and the squad car was turning around and coming back to me. She sighed. Told me to get off the phone, and answer the door when they came. She said that one of the patrol men in that car was her new fiancee. She would do her best to get him to let this all go. Crying myself now, I begged her not to let my family know about this. She promised and as we hung up, she said in a low voice… “Some day, years from now, you might want to mention this to Michael, and tell him that I tried to pay him back for what I did to him. You straighten out, little girl!”

The cops came, questioned us very briefly. Asked who Doris was and we both blurted out – my sister. The one patrol officer knew me from school, and knew I had no sisters. He didn’t raise an eyebrow, just scribbled the report. On the way out, they saw the bullet hole in the wall opposite my door. (The bullet had passed clean through Jeff’s arm.) Asked how long that had been there and I said since before I moved in. They left. Whew!

Jeff eluded arrest that day, but eventually did end up in jail. My head finally healed – but I think that the episode must have shook my brains up, because I did allow Jeff back into my life for a brief – forgettable – time. I paid to get the neighbor’s broken nose and glasses fixed. He eventually forgave me (I think.) Doris healed and grew into a radiant, beautiful woman, married a marvelous man and now has 3 daughters – none of which will ever see their grandmother’s or granduncle’s faces. Go Doris!

Joanie… sigh. Like me, she married many times, unlike me, she tried desperately to have children. After 10 miscarriages, she finally delivered a little boy. She kept trying for more, but the last I heard, she had found out that she had uterine cancer, and they had to remove everything. She took off, Doris is raising her son, and no one’s heard from Joanie since. She will always remain in my heart and prayers. Wherever you are, Tits, I hope you can find healing.

When Mike and I were together in Florida, at Dad’s death, I finally did confess this story to him and Mom. We were sitting on the patio, late one night in the dark, doing the Irish wake thing. (Drink alot and tell your tales.) When I told him what Sharon Stewart had said at the end of the phone call, he put his head into his hands for a minute. Looked up with a grim smile. “Don’t tell my wife… I don’t think she’d understand, but a part of me still loves that girl.”
I grinned at him. “Yeah, babe. A part of me sure does, too.” 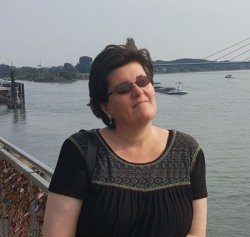